CALL US OR TEXT US 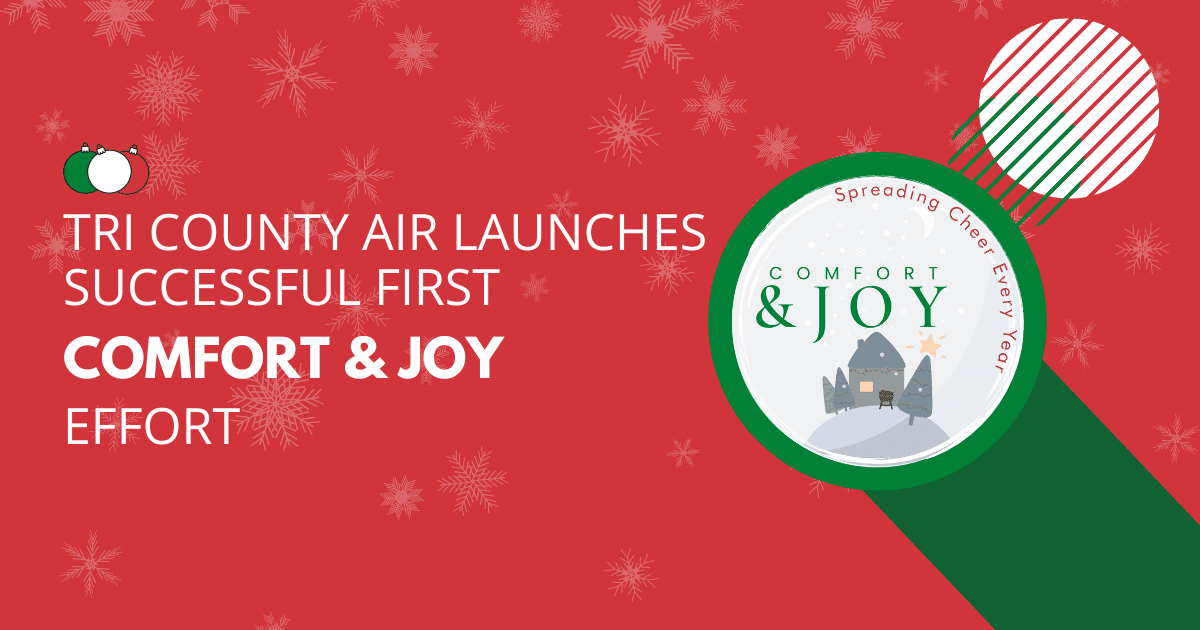 This year, we set out with the goal of installing one new air conditioning and heating system for a local family in need. Back in May, the planning began. With the blessing of Billy Swanson, Owner of Tri County Air, Processing Manager, Maddy Presley, and Marketing Director, Victoria May, put their heads together to establish how this was going to work. They decided to call this effort “Comfort and Joy” because not only did they want to bring this family comfort in the form of a new A/C system, but they also wanted the experience to be joyful for all involved. The goal was to go over and above to make this experience about more than just the A/C itself by discovering other ways to come alongside this family. The details were finalized, and plans were set.

Then, the unforeseeable happened: Hurricane Ian. Three days before the website was set to open to receive nominations, many of our employees and many members of the community we serve found themselves stranded. Ultimately, Comfort and Joy had to be postponed.

After a few weeks of taking care of our employees, we decided it was time to launch Comfort and Joy. Though the timeline was shortened, we still received over 20 nominations which were narrowed down to a top 10 for voting. Votes were cast and over 3400 votes were received from the community. Finally, the winner was decided.

A few hours later, after reading the stories of the top three nominees, Billy Swanson decided Tri County Air would install three new air conditioning systems instead of one! Over the course of the next few days, Comfort Advisors were sent out, equipment was ordered, install teams were assigned, and plans were made to truly bring Comfort and Joy to these families. It was a whirlwind!

At last, December 10th arrived: Comfort and Joy Day! We purchased breakfast and lunch for each of the families and their install crews, cut grass, hooked up a washing machine, and even brought some gingerbread houses for the kids. The install teams worked hard to get each system installed, managers and Comfort Advisors talked with the winners and heard their stories first-hand. We were inspired by their lives.

Catherine Mitchell is a foster mom who moved out of her house and in with her mom so her friend’s family could move in and use her house as their own after she lost her husband in a car accident and her house to Hurricane Ian. The Terry family are retired law enforcement who unexpectedly had to house their veteran son and his family when his job fell through right before Hurricane Ian and sustained extensive damage from the storm. Jeanette Thompson was nominated by her granddaughter and described as the type of person who “takes care of everyone but herself.” She has been using fans and window units due to being financially unable to replace her broken air conditioner.

Their stories were impactful, and we were honored to bring each family some Comfort and Joy this Christmas season! Going forward, our hope for Comfort and Joy is that this effort wouldn’t end with these three families but instead would inspire others to promote generosity throughout the holidays and beyond. As Maddy Presley explained, “The intention has always been about more than air conditioning systems, it is about creating a celebration and providing for those who truly need it. It is about fulfilling our mission, which is: to comfort all in such a way that they are compelled to tell others about their experience, and it honors the Great Comforter, Jesus Christ. I believe we accomplished that goal.”